This year the ISV team set up a special pre-day this year at WPC.  Having sat through a couple of sessions so far I think this is a great idea.  It’s been fantastic to have all the content focused in the same room on the same day.  This is much better than having sessions spread out throughout the conference. 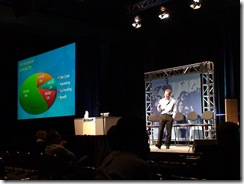 I was particularly impressed with the inclusion of partners throughout all the sessions.  Erik Weiss from the same Platform Evangelism team I’m on brought in a Dynamics CRM ISV partner to help out in his session.  Mark Bates from RDT did a fabulous job of describing his experiences around early adoption (the good and the bad).  There was not much new in the session for me.  It’s all stuff that we talk about about quite often.  What I loved was that it was just so much more credible coming from Mark.  He did a great job of talking about it from an ISVs perspective.  I really liked the real life story he told about how the benefits of early adoption helped him to pull in a real deal.

BTW, we did a video of Mark talking about CRM 4.0 a little while back (while it was still in beta). Have a look here.